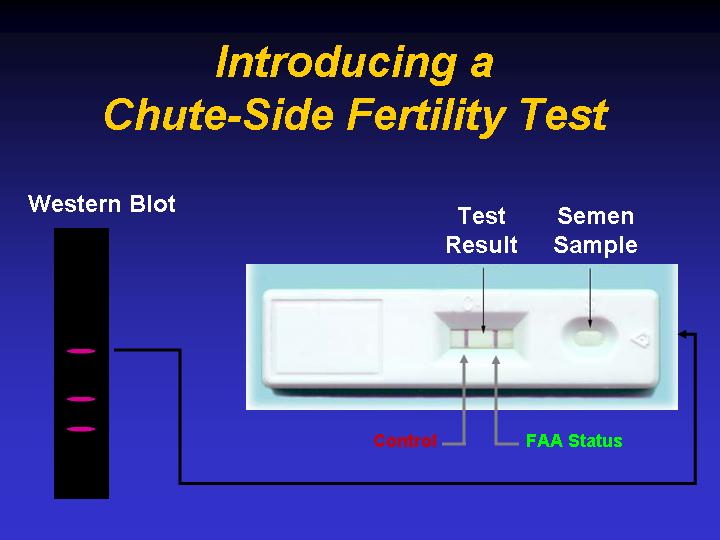 Q: What is Fertility-Associated Antigen (FAA)?
A: FAA is a unique protein found on sperm surfaces which serves as a marker for higher fertility bulls.

Q: Where does FAA come from?
A: This protein is produced in fluids from the Seminal Vesicles, Prostate and Cowper’s gland at the time of ejaculation.

Q: When does a bull start producing FAA?
A: Production of FAA depends upon testosterone, so it appears in tissues at puberty when testosterone is secreted by the testes.

Q: How is FAA detected?
A: A semen sample is diluted with a balanced salt solution and is applied to a cassette containing reagents to specifically detect FAA. If FAA is present a color change occurs on the cassette within a few minutes.

Q: How large a difference is there in fertility between bulls detected or FAA- positive or herdmasters designated FAA-negative?
A: Extensive field trials spanning 10 years with over 15,000 cows bred to approximately 600 bulls indicates a 17% difference in pregnancy rates.

Q: What are my odds of having a bull that would be categorized as FAA-negative?
A: In April 2003, semen was obtained from almost 914 bulls in 18 herds in 6 states. Those samples were used for breeding soundness evaluations, and the FAA test cassette was used to analyze semen on-site. Twenty six and one half (26.5%) percent of the bulls produced acceptable physical quality semen which lacked FAA.

Q: Does FAA status of a bull change over time?
A: All bulls which test positive remain positive. A young bull that tests negative should be re-tested because he may be early in puberty. He may test positive within a couple of months. However, if contemporary herdmasters which are the same age test positive, they should be selected as herd sires because they obviously reached puberty at an earlier age.

Q: Should FAA- negative bulls be culled from the herd?
A: If higher fertility and earlier maturing animals are important traits to a breeder then every effort should be made to eliminate these bulls.

Q: Mechanistically, how does the cassette test work to detect FAA?
A: Separate instructions describe the procedure in detail. As a diluted semen sample flows across a membrane in the cassette, an antibody, which identifies only FAA, binds to it generating a narrow band of color which is observed by the person conducting the test. A negative result indicates that the antibody on the cassette failed to detect FAA in a sample.

Q: Can the FAA test replace a breeding soundness evaluation?
A: No! A sample without any sperm still contains all components in seminal secretions, including FAA. It is important that a person trained to evaluate semen, usually a veterinarian, qualifies a bull on the basis of a satisfactory BSE. The FAA test is ideally conducted using the same sample that was examined for the BSE.

Q: What if bulls are being collected over a several day period of time, with intentions of running the FAA test on the entire bunch of samples afterwards?
A: In this case, a small volume of semen (0.5 cc) should be saved in a vial that can be labeled with each bull’s I.D. The sample should be frozen as soon as possible after the BSE to prevent breakdown of FAA by enzymes normally found in semen.

Table 1. Fertility within a herd of cows if different proportions of FAA-negative bulls are included with FAA-positive bull’s breeding cows.

Q: Is FAA presence in semen heritable?
A: In herds where test cassettes were utilized, it was very evident that negative samples were prevalent within sire lines. This was obvious to herd owners when their data was summarized.

Q: How much does the FAA test cost?
A: Individual tests  cost approximately $40.00 USD, depending on quantities in the United States Since it is common to utilize a ratio of 1 bull per 25 cows in breeding pasture, this amounts to $1.60 per cow. Of course, if samples are for artificial insemination, the cost per cow would decrease below that.